YOUR Auto Tune Up And Repair Options
6 new types of additive treatments detailed here are ending car and diesel truck operating and mechanical problems - Their usage gives you a superior Do-it-yourself care and repair option that cuts in half both brand new, and older vehicle repairs, while adding years more trouble free usage. The quickest, easiest, cheapest option ever invented to end your mechanical and performance problems chemically, while at the same time, slam the brakes on future troubles no other care and repair method offers.
Menu

If you have an engine making noise, perhaps knocking, its to late to test for what's wearing. The mechanic will know by listening.

The idea about oil analysis sounds good to a behind-the-desk-engineer but to a field mechanic - it means nothing.

Because the mechanic listens to engine sounds.

That sound determines the worn parts needing new ones. Oil analysis does not save him any time in that respect. The check to see what oil additives are needed by metal shavings percentages is never called upon.

During tear down the mechanic will check every cam bearing, the crankshaft bearings, rod bearings, the valve lifters,  valves, the oil screen, the oil pump  and make a decision on what's OK and what needs replacement.

The mechanic does all that - and an oil analysis review will not be in any decision he makes.

Lets say you have a big engine. its several years old. For some time, the seals have been leaking oil and hydraulic fluids. The hours are high and wear is causing it to burn oil.

Does the mechanic order the shut down of that equipment to fix it? No!

Does he order the oil analysis report? No!

That would amount to thousands of dollars down time and work stoppage. Instead, he just adds oil and fluid as needed.

The boss hears that the equipment is having a problem. Does he order a oil analysis review? No? he knows what the mechanic has said needs to be done. He will bet, the bad news is not that bad, and orders the mechanic to keep it running as long a possible. 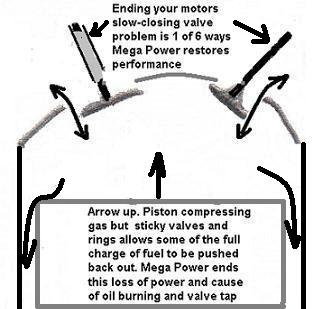 Some mechanics know that additives can help extend the times before downtime and repair takes place - but most ignore such usage as the additives may replace them.

Mega Power is a company that sells treatments for leaky oil burning well worn engines. This product adds several conditioners that chemically is adding thousands of additional hours to older engine life and great running performance - even though older and worm.

Mega Power is better than oil analysis review as it revitalizes engines in 15 minutes - then keeps them running at their peak again, indefinitely.